More speculation over the Rangers’ free-agent situation plus the latest on the Penguins in today’s NHL rumor mill.

WHICH RANGERS FREE AGENTS WILL BE BACK NEXT SEASON?

NEW YORK POST: Mollie Walker looked at which Rangers’ free agents will be back next season and which ones could be playing elsewhere. 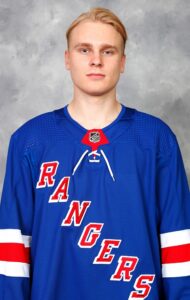 Kaapo Kakko’s surprising scratch from Game 6 of the Eastern Conference Finals raises questions about his future with the Rangers. He’s a restricted free agent who would be an affordable fit with a two-year bridge deal between $2 million and $2.5 million. Should the 21-year-old winger entertain offer sheets between $4.2 million and $6.1 million, however, the Rangers wouldn’t be able to match.

SPECTOR’S NOTE: Offer sheets are rare but there’s a chance Kakko could sign one. Walker’s colleague Larry Brooks pointed to the Carolina Hurricanes’ successfully signing away Jesperi Kotkaniemi from the Montreal Canadiens last summer. He acknowledged the Hurricanes’ move was based on a certain amount of payback because of the Canadiens’ failed attempt in 2019 to sign away Sebastian Aho.

Kakko could be upset enough over being scratched from Game 6 to perhaps entertain offer sheets from other clubs. However, it’s not a preferred tactic by most general managers. With limited salary-cap space for next season, they’re likely to invest their dollars this summer on more established talent.

Ryan Strome’s lack of production in this year’s postseason combined with the Rangers’ cap situation could see him depart as an unrestricted free agent.

SPECTOR’S NOTE: Walker also noted Strome is among the Rangers’ alternate captains and one of his best friends is linemate Artemi Panarin. Those are good reasons for the Blueshirts to retain him, perhaps by freeing up cap space by making a cost-cutting move. If that’s not possible, Strome may have played his final season as a Ranger.

Walker considers Andrew Copp as the priority signing among their trade-deadline acquisitions. He could get more on the open market than the Rangers can afford to pay but perhaps he’ll accept less to remain in New York if he believes they’re close to winning the Stanley Cup.

Fourth-line forward Tyler Motte’s willingness to sign a team-friendly deal could come down to contract term. RFA Sammy Blais played well before suffering a season-ending injury in November. He’ll likely re-sign a deal that works for the Rangers.

UFA winger Frank Vatrano might not be the team’s answer to filling out their top-six. Depth forward Greg McKegg could also return on an affordable contract. Walker wonders if the Rangers can afford to bring back fourth-line Kevin Rooney.

THE ATHLETIC: Rob Rossi reports multiple sources said the Pittsburgh Penguins’ priority is getting Kris Letang signed to a new multi-year contract. The 34-year-old defenseman is due to become a UFA on July 13.

Discussions between the team and the representatives of Letang and UFA center Evgeni Malkin are ongoing. However, the club wants to determine the cost of signing Letang before turning their attention more seriously to Malkin.

SPECTOR’S NOTE: Letang is coming off a career-best 68-point season. Recent reports suggest he could seek a new deal close to his current annual average value of $7.25 million. Malkin is reportedly willing to accept a pay cut from his current $9.5 million AAV. Whatever Letang wants could determine how much cap room they’ve got left for Malkin.

PITTSBURGH HOCKEY NOW: Dan Kingerski recently reported some teams have contacted the Penguins to express interest in Pierre-Olivier Joseph. Sources said the New York Islanders and Montreal Canadiens were among the clubs that looked into the promising 22-year-old defenseman before the trade deadline.

Kingerski suggested Canadiens defenseman Jeff Petry as a potential replacement for Kris Letang if the latter departs via free agency. Petry requested a trade earlier this season but reportedly reconsidered after Martin St. Louis took over a head coach.

SPECTOR’S NOTE: The Canadiens could ask for Joseph as part of the return for Petry if they were to peddle the latter to the Penguins. Whether that happens remains to be seen. The Dallas Stars were also thought to have some interest in Petry.

← NHL Morning Coffee Headlines - June 13, 2022 NHL Morning Coffee Headlines - June 14, 2022 →
We use cookies on our website to give you the most relevant experience by remembering your preferences and repeat visits. By clicking “Accept”, you consent to the use of ALL the cookies.
Do not sell my personal information.
Cookie SettingsAccept
Manage consent