Why didn’t the Islanders land Kadri? What’s the latest on Isles RFAs Noah Dobson and Alexander Romanov? Who will the Golden Knights turn to for goaltending with Robin Lehner out for the season? Find out in today’s NHL Rumor mill.

NHL NETWORK: Elliotte Friedman believes the New York Islanders were interested in Nazem Kadri. However, he thinks they struggled to free up the necessary cap space to sign him, whereas the Calgary Flames were in a better position to clear cap room. On Thursday, the Flames signed the 31-year-old center to a seven-year, $49-million contract.

SPECTOR’S NOTE: Lamoriello isn’t sure what the Islanders’ next move will be. They’ve been in the market this summer to bolster their offense. General manager Lou Lamoriello reportedly had an interest in Johnny Gaudreau before he signed with the Columbus Blue Jackets. There was also speculation he was working on a trade with the Vancouver Canucks for J.T. Miller but it apparently fell apart during the NHL Draft last month.

The Islanders have over $11 million in salary cap space, but most of that will be going toward re-signing two key restricted free agents. Speaking of whom… 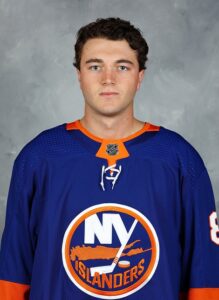 Friedman believes Lamoriello has already signed RFA defensemen Noah Dobson and Alexander Romanov to new contracts. He guesses Romanov will come in around the $3 million range per season. Friedman believes Dobson’s will be “a big number”.

SPECTOR’S NOTE: Dobson is coming off a breakout performance, netting 51 points on a club that was among last season’s lowest-scoring teams. That big number Friedman is referring to could be over $6 million annually.

SAN JOSE HOCKEY NOW: Sheng Peng cited a league source claiming the Vegas Golden Knights intend to start the season with their current goaltenders unless something falls into their laps. Starter Robin Lehner is sidelined for the season recovering from hip surgery, leaving Logan Thompson, Laurent Brossoit and Michael Hutchinson to fill the void.

Brossoit is also recovering from hip surgery but is believed ahead of schedule. However, he’s not expected to return to action until several weeks into the coming season.

Peng noted the Sharks have three goalies in Kaapo Kahkonen, James Reimer and Adin Hill for the coming season. Reimer could be the odd man out but the Sharks are rumored to be seeking a second-round pick for him. Peng said it’s uncertain if the Sharks and Golden Knights have discussed Reimer but he thinks the latter could be unwilling to part with a second-rounder.

NYI HOCKEY NOW: Stefen Rosner considers it unlikely that the Islanders will part with veteran netminder Semyon Varlamov. Nevertheless, he wondered if the Golden Knights would be willing to offer up defenseman Nic Hague and a mid-round pick for Varlamov if their current goalies fail to get the job done.

SPECTOR’S NOTE: The Golden Knights will likely use next month’s training camp/preseason schedules to evaluate their goaltenders before determining if they need an upgrade. Thompson showed promise down the stretch last season. If he can rise to the occasion, they’ll be content to stick with what they’ve got and see how the season unfolds.

If Thompson struggles, the Golden Knights could hit the trade market to avoid falling out of playoff contention. Maybe they’d be willing to pony up for Varlamov if the Isles are willing to move him and if the Golden Knights aren’t on his 16-team no-trade list. Otherwise, they’ll have to consider other options like Reimer.

← NHL Morning Coffee Headlines - August 20, 2022 NHL Morning Coffee Headlines - August 21, 2022 →
We use cookies on our website to give you the most relevant experience by remembering your preferences and repeat visits. By clicking “Accept”, you consent to the use of ALL the cookies.
Do not sell my personal information.
Cookie SettingsAccept
Manage consent