A look at the latest Leafs speculation as training camp approaches in today’s NHL Rumor Mill.

THE ATHLETIC: Jonas Siegel wondered when the Toronto Maple Leafs and Rasmus Sandin will finally reach an agreement on a new contract. The 22-year-old defenseman is a restricted free agent lacking arbitration rights, giving him little leverage except to not report to training camp.

Missing playing time could put Sandin at risk of falling behind his teammates. Siegel suggests the young blueliner accept a one-year deal that would provide him with arbitration rights next summer or a two-year deal similar to the one Timothy Liljegren signed in June with an average annual value of $1.4 million. 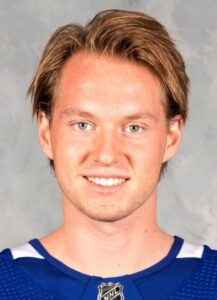 SPECTOR’S NOTE: It’ll be interesting to see how the Sandin camp handles this. Missing training camp (and preseason play) almost always hampered a player’s performance upon his return to the lineup.

The Leafs are currently over the $82.5 million salary cap for the coming season by roughly $1.5 million. General manager Kyle Dubas could be forced to make a significant cost-cutting move to accommodate whatever Sandin is seeking. Taking the one-year deal and garnering arbitration rights next summer would give the young blueliner the leverage to secure better terms on his next contract.

Siegel also noted the Leafs wouldn’t necessarily have to do anything to get under the cap until Sandin signs. They could ice a 20-man roster to start the season if need be. He acknowledged that defenseman Justin Holl has surfaced as a trade candidate but doesn’t see the sense in trading him while Sandin remains unsigned. Dubas could also place Holl on waivers but there’s the risk of losing him to another club for nothing.

The Leafs signing Zach Aston-Reese to a professional tryout offer also caught Siegel’s eye. Among the reasons could be to provide options in case they want to move a forward such as Alex Kerfoot, though he doesn’t see Aston-Reese as an improvement over Kerfoot.

SPECTOR’S NOTE: Kerfoot carries an AAV of $3.5 million and he’s slated to become an unrestricted free agent next summer. Moving him would put them under the cap by $2 million, providing sufficient wiggle room to ink Sandin.

However, the Toronto Sun’s Terry Koshan is skeptical about a Kerfoot trade. “If Dubas had true designs on moving Kerfoot, you would think it would’ve happened by now.”

SPORTSNET: In a recent mailbag segment, Luke Fox was asked about what it might cost for the Leafs to acquire Patrick Kane from the Chicago Blackhawks.

The reader wanted to know if “2 firsts, Sandin and Robertson” might get it done. Fox considered that a load to surrender for a playoff rental. He suggested “a first-round pick, a mid-round pick, a quality prospect, and a roster player.”

SPECTOR’S NOTE: That’s assuming Kane waives his full no-movement clause to go to Toronto. And Dubas convinces the Blackhawks to retain half of Kane’s $10.5 million salary-cap hit. And he finds a third team willing to help him divide the remaining $5.25 million in half to squeeze the winger within the Leafs’ limited cap payroll. Provided, of course, Dubas outbids other clubs for Kane’s services.

Let’s revisit this at the 2023 trade deadline and see if it works out.

← NHL Morning Coffee Headlines - September 10, 2022 NHL Morning Coffee Headlines - September 11, 2022 →
We use cookies on our website to give you the most relevant experience by remembering your preferences and repeat visits. By clicking “Accept”, you consent to the use of ALL the cookies.
Do not sell my personal information.
Cookie SettingsAccept
Manage consent