Would a coaching change or trade help the Leafs? What’s the latest on the Sharks following last week’s report claiming management is willing to entertain offers for most of their players? Find out in today’s NHL Rumor Mill.

WHAT WILL IT TAKE TO IMPROVE THE LEAFS?

SPORTSNET: Luke Fox wonders if a big trade or a coaching change can reverse the fortunes of the struggling Toronto Maple Leafs. They are 4-4-2 in October, including losses to rebuilding or struggling clubs like the Montreal Canadiens, Arizona Coyotes, San Jose Sharks and Anaheim Ducks. 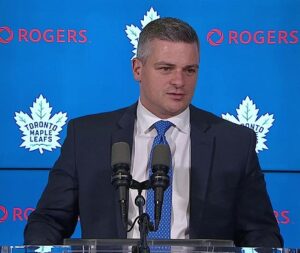 Head coach Sheldon Keefe seems to be running out of options to motivate his players. Fox blamed general manager Kyle Dubas for not providing Keefe with a better supporting cast for his core talent. He believes the Leafs as currently constructed should reach the playoffs but won’t scare anybody when they get there.

Fox also noted the Leafs lack “gritty, hard role players”. He pointed out they used to have such players in Nazem Kadri, Zach Hyman, Connor Brown, Ilya Lyubushkin and Mason Marchment but all were cut loose “due to economics or an inability to fit the vision.”

SPECTOR’S NOTE: Some, including Leafs like Mitch Marner, pointed out they got off to a worse start last season and ended up with a franchise-record 115 points. That’s as may be but, as The Athletic’s James Mirtle pointed out, there are more Leafs performing poorly compared to the same time last season.

If the Leafs don’t turn it around in November there could be some changes coming. The most immediate could be replacing Keefe as head coach since they lack the cap space and available assets to make a significant trade that will reverse their fortunes. I agree with Fox that Dubas failed to provide the necessary assets to maintain a balanced roster. However, at this point, it seems like they might benefit from someone else behind the bench.

I’m not sure if adding gritty, hard role players is the answer. The Leafs still failed to win a playoff round with Kadri, Hyman, Brown, Lyubushkin and Marchment, though the latter barely saw enough playing time to make a difference during his short tenure in Toronto. Finding reliable goaltending and defensive depth might be better options.

THE ATHLETIC: Corey Masisak recently reported the San Jose Sharks players are shrugging off a report on Thursday by TSN’s Pierre LeBrun claiming GM Mike Grier is willing to entertain offers for almost everyone on the roster except perhaps for Tomas Hertl.

Masisak pointed out LeBrun didn’t say Grier intends to trade certain players. He also cited Sharks coach David Quinn saying every general manager around the league is probably talking to each other to gauge where they are at this point in the season.

It may be a little early for Grier to start shopping players. He could be willing to listen to offers but it doesn’t mean he’s about to tear it all down and start a complete rebuild.

Nevertheless, Grier will likely become a seller if the Sharks are well out of playoff contention when the calendar flips to 2023. He will likely start shopping pending UFAs like James Reimer and Nick Bonino and perhaps test the trade market on pending RFA winger Timo Meier.