Hat trick performances by the Avalanche’s Mikko Rantanen and the Coyotes’ Clayton Keller, a four-point game for the Blue Jackets’ Jack Roslovic, and more in today’s NHL Morning Coffee Headlines.

NHL.COM: The Colorado Avalanche nipped the St. Louis Blues 3-2 in overtime with Mikko Rantanen scoring all three goals. Pavel Francouz made 30 saves as Colorado overcame a 2-1 deficit in the dying seconds of regulation. The Avalanche snap a five-game winless skid and improve to 14-10-2. Vladimir Tarasenko and Brandon Saad tallied for the Blues as they drop to 12-15-1. 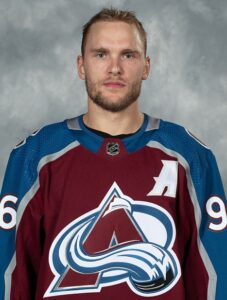 Arizona Coyotes forward Clayton Keller scored in overtime to complete his hat trick in a 5-4 victory over the Philadelphia Flyers. Morgan Frost had a career-high four points in this contest for the Flyers (9-13-7) while the Coyotes are 9-13-14 on the season.

A four-point performance by Jack Roslovic helped the Columbus Blue Jackets defeat the Los Angeles Kings 6-5. Johnny Gaudreau had three points (including the winning goal in overtime) while linemate Patrick Laine had a goal and two assists for the Jackets (10-15-2). Anze Kopitar tallied twice for the 15-11-5 Kings.

Third-period goals by Jake DeBrusk and Charlie Coyle lifted the Boston Bruins to a 3-1 win over the Vegas Golden Knights. Linus Ullmark stopped 30 shots as the Bruins took over sole possession of first place in the overall standings with a record of 22-4-1 (45 points). Mark Stone scored for the Golden Knights (20-9-1) as they remain in first place in the Western Conference.

Washington Capitals captain Alex Ovechkin scored his 797th career goal in a 5-2 victory over the Winnipeg Jets. Charlie Lindgren made 29 saves as the Capitals (14-12-4) picked up their fourth straight win. Adam Lowry and Pierre-Luc Dubois replied for the Jets (18-8-1), who were without sidelined forward Saku Maenalanen (lower body) and defenseman Logan Stanley (upper body). Both were placed on injured reserve earlier in the day.

The Seattle Kraken snapped a three-game losing skid by defeating the Florida Panthers 5-2. Matty Beniers and Yanni Gourde each had a goal and an assist while Martin Jones kicked out 23 shots for the 16-8-3 Kraken. Eric Staal and Chris Tierney replied for the Panthers as they drop to 13-12-4.

DAILY FACEOFF: The Nashville Predators placed winger Eeli Tolvanen on waivers. The 23-year-old has two goals and four points in 14 games this season. He was chosen 30th overall by the Predators in 2017.

SPECTOR’S NOTE: Tolvanen was once considered a promising prospect expected to become a top-six winger with the Predators. He’s struggled to play up to those expectations. It’ll be interesting to see if he gets plucked off waivers later today.

THE TENNESSEAN: Speaking of the Predators, forward Michael McCarron has entered the NHL/NHLPA Player Assistance Program. He will continue to be paid while receiving treatment and will return to the lineup once he’s cleared for on-ice competition by the program administrators.

DETROIT HOCKEY NOW: Over $65,000.00 has been raised for former Red Wings defenseman Vladimir Konstantinov to defray costs he and his family will incur due to changes in Michigan’s automobile insurance laws. Konstantinov was permanently disabled in a limo crash following the Wings’ 1997 Stanley Cup championship.

SPECTOR’S NOTE: Those interested in contributing can do so by following the directions in the above link. For a $50.00 donation, you will receive a signed photo of Konstantinov. For $75.00, you receive a 1997 Stanley Cup Final puck autographed by Konstantinov or former Wings head coach Scotty Bowman. A $200 donation garners a signed Konstantinov Red Wings jersey.

SPORTSNET: Former NHL superstar Jaromir Jagr collected two assists as the 50-year-old forward made his season debut for the Kladno Knights in the Czech Extraliga.

← Sunday NHL Rumor Roundup - December 11, 2022 NHL Rumor Mill - December 12, 2022 →
We use cookies on our website to give you the most relevant experience by remembering your preferences and repeat visits. By clicking “Accept”, you consent to the use of ALL the cookies.
Do not sell my personal information.
Cookie SettingsAccept
Manage consent