NHL.COM: Ottawa Senators captain Brady Tkachuk had a “Gordie Howe hat trick” to a 3-2 overtime victory over the New York Rangers. Tkachuk scored the tying and winning goals, collected an assist on Tim Stutzle’s goal, and fought Rangers defenseman Jacob Trouba. Tkachuk’s game-tying tally was also his 100th career goal as the Senators improved their record to 9-13-1. Vitali Kravtsov and Mika Zibanejad replied for the 11-9-5 Rangers. 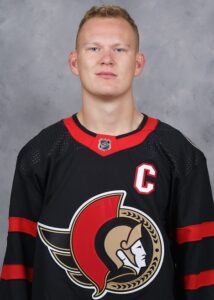 SPECTOR’S NOTE: There was a scary moment prior to Kravtsov’s goal when he fired a shot that struck Senators defenseman Travis Hamonic in the throat. Hamonic left the game but returned in the second period and played the remainder of the contest.

Columbus Blue Jackets winger Patrick Laine scored twice to lead his club over the Winnipeg Jets by a score of 4-1. Laine had missed the previous seven games with an ankle injury. Johnny Gaudreau collected three assists and Joonas Korpisalo made 37 saves for the Blue Jackets (8-12-2). Pierre-Luc Dubois replied for the 14-7-1 Jets.

SPECTOR’S NOTE: Before this game, the Blue Jackets announced that winger Jakub Voracek is out indefinitely with a concussion. Defenseman Zach Werenski underwent successful surgery to repair a torn labrum and will be sidelined for six months while blueliner Jake Bean (shoulder surgery) is out for four-to-six months.

The Nashville Predators picked up their third straight win by downing the New York Islanders 4-1. Kevin Lankinen kicked out 48 shots for the win and Matt Duchene had a goal and two assists as the Predators improved to 12-9-2. Mathew Barzal scored for the Islanders as they sit at 15-10-0.

SPECTOR’S NOTE: Predators captain Roman Josi had a goal and an assist in this game. With 562 career points, he’s just four points away from David Legwand’s franchise record of 566 points.

THE MERCURY NEWS: Joe Thornton has been seen attending San Jose Sharks practices and home games with members of the team’s front office in recent weeks. Thornton, 43, hasn’t announced his retirement as an NHL player but is said to be carefully considering his next move.

SPECTOR’S NOTE: My guess is Thornton will officially bring his playing career to a close once he decides what his off-ice career will be. One of the greatest playmakers in NHL history, he’s a certain first-ballot Hall of Famer.

SPECTOR’S NOTE: The fate of the Canucks’ playoff hopes could rest upon the performance of backup Spencer Martin and call-up Collin Delia.

DETROIT HOCKEY NOW: Oft-injured Red Wings forward Tyler Bertuzzi will spend six more weeks on injured reserve. He underwent successful surgery on Friday to repair damage to his left hand after being struck by a shot from teammate Ben Chiarot during Wednesday’s 5-4 loss to the Buffalo Sabres.

CBS SPORTS: The Carolina Hurricanes removed Teuvo Teravainen (upper body) from injured reserve on Friday. His availability for Saturday’s game against the Los Angeles Kings remains to be determined.

TSN: The Tampa Bay Lightning placed defenseman Philippe Myers on waivers. He was acquired last summer from the Nashville Predators and signed to a two-year contract by the Lightning. Myers has appeared in 11 games this season.