Could the Canadiens re-sign Sean Monahan or attempt to move him before the March 3 trade deadline? Which Sharks are the most likely to be traded this season? What’s next for unsigned Senators Alex Formenton? Find out in today’s NHL Rumor Mill.

TSN: Pierre LeBrun reports the Montreal Canadiens are considering whether to trade Sean Monahan before the March 3 trade deadline or re-sign him. Having acquired the 28-year-old center last summer along with a first-round pick, it seems a foregone conclusion they’d flip him for another asset before the deadline. 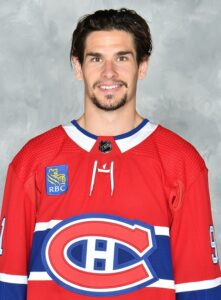 Monahan, however, has impressed Canadiens management with how well he’s fit in on and off the ice. There’s now talk within the organization over whether they should re-sign the pending unrestricted free agent. LeBrun believes Monahan is likely to be moved but considers the fact they’re talking about keeping him as an interesting development.

SPECTOR’S NOTE: Montreal Hockey Now recently reported that Monahan is considered among the most popular targets in this season’s trade market. The Ottawa Senators have been scouting the Canadiens regularly of late, though they’re believed to be interested in Christian Dvorak and Josh Anderson. Then again, the Sens could be simply scouting the Habs for their upcoming game on Dec. 14.

Monahan’s enjoying a strong bounce-back performance this season after hip injuries hampered his final seasons with the Calgary Flames. He’s fourth among the Canadiens’ scorers with a respectable 16 points in 23 games. Those are solid numbers on a rebuilding club.

How long Monahan stays in Montreal could depend on what type of contract he’s seeking. What type of offers he draws in the trade market will also be a determining factor. If a Cup contender comes calling with a first-round pick and/or a top prospect, that could be an offer that general manager Kent Hughes can’t refuse.

If Meier gets shopped he could command the highest return of any forward likely to be moved by the 2023 trade deadline. A restricted free agent next summer, the 26-year-old is a bona fide first-line winger in the prime of his playing career. It will cost $10 million to qualify his rights, however, which could make him a rental player unless he can be signed to a long-term extension with a lower annual cap hit.

Reimer would be invaluable for contenders looking for insurance between the pipes. He carries an affordable $2.25 million cap hit and is slated to become an unrestricted free agent in July.

Middle-six wingers Alexander Barabanov, Matt Nieto and Nico Sturm round out Peng’s list. Nieto is also a pending UFA while Barabanov has a year left on his deal with a $2.25 million cap hit and Sturm has two more seasons at $2 million per.

SPECTOR’S NOTE: Peng doesn’t consider Meier getting traded as a certainty. That’s because the Sharks don’t have to peddle him at the trade deadline but could wait until the offseason if unable to get him signed to an extension. I can see them peddling Reimer and Nieto but they could hang onto Barabanov and Sturm unless they get some solid offers for those two.

WHAT NEXT FOR FORMENTON?

TSN: Darren Dreger looked at what could be next for restricted free-agent winger Alex Formenton. He and the Ottawa Senators failed to reach an agreement on a new contract by the Dec. 1 deadline and he’s now ineligible to play in the NHL for the rest of this season.

Dreger said there was some trade interest in Formenton and Senators GM Pierre Dorion worked on that until well past the deadline. The 23-year-old winger could play with a European club for the remainder of this season. The Senators could trade his rights or he could sign an offer sheet with another NHL club. In those two instances, however, he’d remain ineligible to play in the NHL this season.

SPECTOR’S NOTE: Dreger also said Formenton’s situation is “complicated.” He could be alluding to the winger being a member of Canada’s 2018 World Junior club currently under investigation on allegations of sexual assault.

That investigation is reportedly close to completion. Formenton has maintained his silence about this situation, which has been interpreted as guilt by some observers. Thus far, however, there’s nothing formally tying him to those allegations. We will learn more once the findings of the investigation are completed.

← NHL Morning Coffee Headlines - December 2, 2022 NHL Morning Coffee Headlines - December 3, 2022 →
We use cookies on our website to give you the most relevant experience by remembering your preferences and repeat visits. By clicking “Accept”, you consent to the use of ALL the cookies.
Do not sell my personal information.
Cookie SettingsAccept
Manage consent