A Bump In The NHL’s Road Toward Inclusivity

It’s been a week since Philadelphia Flyers defenseman Ivan Provorov refused to wear a rainbow jersey in a pregame skate against the Anaheim Ducks as part of his team’s Pride Night in support of the LGBTQ+ community. The fallout continues to resonate around the NHL.

Provorov, who is Russian Orthodox, cited his religious beliefs for his decision during a post-game press scrum. “I respect everybody and respect everybody’s choices,” he said following the game. “My choice is to stay true to myself and my religion.”

Flyers coach John Tortorella supported his blueliner. “Provy did nothing wrong,” he said days later. “Just because you disagree with his decision doesn’t mean he did anything wrong.”

The Flyers and the NHL released statements expressing support for the LGBTQ+ community but also for their players’ right to make their own decisions. That didn’t sit well with a number of pundits and fans as they publicly condemned Provorov, Tortorella, the Flyers and the NHL. 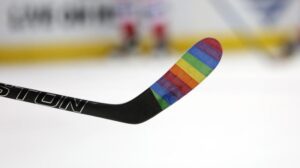 This is what happens when human rights bump against freedom of religion and the right to one’s opinion. It is a complex issue that evokes strong words that too often are based on tribalism rather than serious discussion or debate.

It was a no-win situation for the Flyers and the NHL. Condemn and suspend Provorov, and they make him a martyr to those who oppose “cancel culture” and fear the trampling of individual rights. Support his right to his opinion and beliefs and they would be seen as shielding him while harming their relationship with the LGBTQ+ community.

For the record, I don’t support Provorov’s position. I believe in equality for LGBTQ+ people and feel they’re as worthy of the same rights and freedoms that I enjoy as a white heterosexual man. I don’t have any problem with special events or campaigns that support them. Some of you will agree with me, others won’t. So be it.

Provorov has the right to his opinion and to his religious beliefs in North American society. However, they don’t shield him from the consequences of his decision.

His critics have the right to question his opinion and religious beliefs, particularly because the latter casts LGBTQ+ issues as sinful and immoral. The same belief, by the way, still runs through most Christian denominations.

LGBTQ+ people have suffered for centuries, forced to hide their true selves or face humiliation, condemnation, beatings or death. They’re still facing those fates in many parts of the world.

It’s only been in recent years that they’ve received a growing measure of acceptance in North American society. Nevertheless, many of them are still striving for the same rights, freedoms and acceptance that others take for granted.

A number of Provorov’s critics called him a homophobe, accused him of hiding behind his religion, demanding his suspension or the termination of his contract, with some even suggesting he leave the country.

Citing religious beliefs could be construed as Provorov’s tacit support for his church’s position regarding the LGBTQ+ community. However, he didn’t excoriate LGBTQ+ people or engage in hate speech toward them. He stressed that he respects other opinions but had to be true to himself and his faith. Those remarks didn’t seem to justify the volume of criticism he received.

Provorov’s supporters, meanwhile, question the need for “Pride Nights” or any sort of support for the LGBTQ+ community. There are also hockey fans with no opinion on the subject who decry political or social issues intruding into the sports world which is their solace from the daily strife of the real world.

Keeping such issues out of sports is impossible. Athletes and fans are human beings from all walks of life. Their emotions, beliefs and causes inevitably seep into the sports world whether we want them to or not. That means we have to face them even if they make us uncomfortable or emotional.

Provorov’s critics believe he’s set back the NHL’s direction toward inclusivity. I disagree. Yes, there remains a long way to go regarding the acceptance and inclusion of LGBTQ+ people in hockey. But let’s not overlook how much progress has been made up to this point.

Twenty years ago, the notion of Pride Nights and “You Can Play” campaigns to support LGBTQ+ players and fans was unthinkable. Homophobia was very much a part of hockey with sexual and gender-based slurs regularly tossed around in dressing-room banter and hurled as insults at opponents on the ice.

Things have improved since then for LGBTQ+ hockey fans and players. Amid the fallout over Provorov’s decision, two of his teammates, Scott Laughton and James van Riemsdyk, gathered with 50 LGBTQ+ fans in a pre-arranged meeting following the game.

Both players actively support LGBTQ+ causes. Laughton believed that, overall, it was a “great, great night that brings a lot of awareness.”

Perhaps it did. Maybe Provorov’s stance ends up doing more good than harm if it generates more support for LGBTQ+ people in hockey.

NHL commissioner Gary Bettman said he wanted fans to focus on the 700 players who support the LGBTQ+ community rather than one or two that may have issues for their own personal reasons.

Provorov’s stance can’t be ignored nor should it. However, he’s in a tiny minority if Bettman’s numbers are correct. That means the NHL’s efforts to embrace and support the LGBTQ+ community appear to be working throughout the league.

This situation could be merely a small bump on the road of progress. It shakes things up a little and creates some tension but doesn’t stop the journey.

← NHL Rumor Mill - January 23, 2023 NHL Morning Coffee Headlines - January 24, 2023 →
We use cookies on our website to give you the most relevant experience by remembering your preferences and repeat visits. By clicking “Accept”, you consent to the use of ALL the cookies.
Do not sell my personal information.
Cookie SettingsAccept
Manage consent