​Check out the recaps from Saturday’s action in today’s NHL morning coffee headlines.

NHL.COM: Nashville Predators captain Roman Josi had a hand in all of his club’s goals in a 4-1 win over the Arizona Coyotes. Josi scored two goals and assisted on two others. The Coyotes have lost 14 of their first 15 games of this season. Before the game, Coyotes winger Andrew Ladd entered COVID-19 protocol. 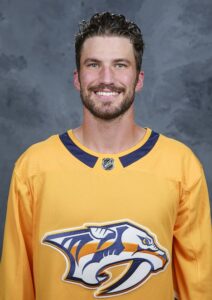 A four-point performance by Drake Batherson (two goals, two assists) powered the depleted Ottawa Senators over the Pittsburgh Penguins 6-3. Evan Rodrigues scored twice for the Penguins. Nikita Zaitsev was placed on COVID protocol before game time after coming off the list early Saturday. The Senators have nine players on the list. They also lost center Shane Pinto as he left the game during the second period with a possible shoulder surgery.

Colorado Avalanche defenseman Samuel Girard scored a goal and set up three others in a 6-2 victory over the San Jose Sharks. Nazem Kadri had a goal and two assists for the Avs. Erik Karlsson and Timo Meier were among seven Sharks players to return to the lineup from COVID protocols. Earlier in the day, the Avs claimed forward Nicolas Aube-Kubel off waivers from the Philadelphia Flyers.

Rookie Rem Pitlick netted a natural hat trick as the Minnesota Wild doubled up the Seattle Kraken 4-2, handing the latter their fourth straight loss. Ryan Hartman collected assists on each of Pitlick’s goals.

The New York Rangers scored three goals in 62 seconds in the second period to beat the Columbus Blue Jackets 5-3. Rangers forward Artemi Panarin and Chris Kreider each scored twice. Blueshirts goalie Igor Shesterkin left in the third period following a collision with Blue Jackets forward Alexandre Texier but got a clean bill of health after the game. Earlier in the day, the Rangers placed center Filip Chytil on injured reserve with an upper-body injury retroactive to Nov. 6.

Vegas Golden Knights forwards Jonathan Marchessault and Evgenii Dadonov both scored twice as their club rolled to a 7-4 victory over the Vancouver Canucks. Vegas captain Mark Stone picked up an assist as he returned to action after several weeks on injured reserve. The Golden Knights have won three straight. Canucks forward Nils Hoglander scored twice and collected an assist.

Detroit Red Wings captain Dylan Larkin scored twice, including the winner in overtime to down the Montreal Canadiens 3-2. Canadiens goalie Jake Allen left the game with a concussion following a first-period collision with Larkin after the latter was shoved from behind by Habs defenseman Jeff Petry. Following the game, the Canadiens called up netminder Cayden Primeau from their AHL affiliate in Laval.

Mark Scheifele’s first goal of the season came in overtime in the Winnipeg Jets’ 3-2 win over the Los Angeles Kings, ending the latter’s seven-game win streak. Jets goaltender Connor Hellebuyck made 27 saves for the win.

Toronto Maple Leafs goalie Joseph Woll made 23 saves to win his NHL debut 5-4 over the Buffalo Sabres. Morgan Rielly tallied the winning goal with 12 seconds remaining in the game. Rielly and John Tavares each had a goal and an assist. Jeff Skinner scored twice for the Sabres.

Brayden Point’s overtime tally lifted the Tampa Bay Lightning to a 3-2 win over the Florida Panthers, extending the latter’s winless skid to four games. The Panthers overcame a 2-0 deficit to force the extra frame. The Lightning’s point streak is now at seven games.

A late goal by Brendan Smith gave the Carolina Hurricanes a 3-2 win over the St. Louis Blues. Sebastian Aho, Andrei Svechnikov and Tony DeAngelo each collected two points for the Hurricanes while Robert Thomas had two assists for the Blues.

The Dallas Stars picked up their first regulation victory of the season by defeating the Philadelphia Flyers 5-2. Roope Hintz and Luke Glendening each had a goal and an assist for the Stars while Anton Khudobin kicked out 31 shots for the win. Kevin Hayes and Ryan Ellis returned to the Flyers lineup after injuries sidelined them for several weeks.

NHL.COM: Detroit Red Wings rookie Lucas Raymond tallied his first NHL hat track and collected an assist in a 6-3 victory over the Chicago Blackhawks. The 19-year-old joins Steve Yzerman as the only teenagers in franchise history to tally a hat trick. Raymond, Yzerman and Gordie Howe are also the only teens in Wings history to net four points in a game. Dylan Larkin collected three assists and Tyler Bertuzzi added a goal and two assists in his return to the lineup. The Blackhawks got Erik Gustafsson and Ryan Carpenter back from COVID protocol but Jujhar Khaira and Riley Stillman were added to the protocol before game time. 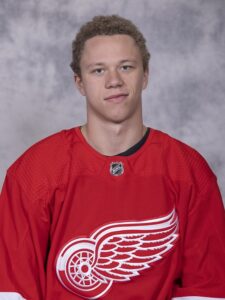 SPECTOR’S NOTE: Now the Red Wings general manager, Yzerman draft Raymond with the fourth-overall pick in the 2020 NHL Draft. The youngster leads all rookies this season with four goals and seven points. Meanwhile, the Blackhawks are winless in six and have yet to hold a lead in a game this season. . Patrick Kane also missed this game as he remained in COVID protocol.

The San Jose Sharks suffered their first defeat of the season as the Boston Bruins held on for a 4-3 win. Brad Marchand, David Pastrnak and Patrice Bergeron each had two points for the Bruins. The Sharks made it close with third-period goals by Tomas Hertl and Timo Meier.

OTTAWA SUN: Senators goaltender Matt Murray was placed on injured reserve with a head/neck injury following a collision with New York Rangers winger Chris Kreider on Saturday. There is no timetable for his return.

NBC SPORTS BAY AREA: Speaking of the Senators, they sent a seventh-round pick in the 2022 draft to the San Jose Sharks for center Dylan Gambrell.

SPECTOR’S NOTE: Trade rumors linked the Senators to a center named Dylan. Many assumed it was the Blackhawks’ Dylan Strome. Injuries to Colin White and Shane Pinto made this move necessary for the Senators to shore up their depth at center.

THE DALLAS MORNING NEWS: John Klingberg is expected to return to the lineup tonight against the Columbus Blue Jackets. The defenseman has been sidelined by a lower-body injury since their season opener on Oct. 14.

← NHL Playoffs: Lightning Try Again to Clinch Eastern Conference Final NHL Rumor Mill - September 18, 2020 →
We use cookies on our website to give you the most relevant experience by remembering your preferences and repeat visits. By clicking “Accept”, you consent to the use of ALL the cookies.
Do not sell my personal information.
Cookie SettingsAccept
Manage consent