Term could be a sticking point between the Vancouver Canucks and defenseman Quinn Hughes. His camp sought a deal beyond five years, perhaps comparable to contracts signed this summer by Dallas’ Miro Heiskanen and Colorado’s Cale Makar. Pat Brisson, one of Hughes’ agents, said there was no animosity as discussions continue. 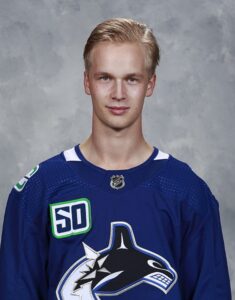 Teammate Elias Pettersson shares the same representatives as Hughes. They were considering a shorter team for the 22-year-old center. Pettersson wants assurances the Canucks are as committed to winning as he is. It could cost a combined $14 million to get both youngsters under contract.

SPECTOR’S NOTE: The Canucks were said to be nervous about Pettersson getting an offer sheet after the Carolina Hurricanes successfully signed away Jesperi Kotkaniemi from the Montreal Canadiens. That’s a remote possibility given the high cost of compensation to the Canucks and salary for Pettersson.

Talks between the Minnesota Wild and winger Kirill Kaprizov continue. Speculation the 24-year-old winger could sign a one-year deal with KHL club CSKA Moscow came to nothing. The Wild hoped to sign Kaprizov to a seven or eight-year deal but the winger’s camp wanted a three-year contract to bring him up to his eligibility age for unrestricted free agent status. Wild general manager Bill Guerin is reportedly willing to consider a five-year deal.

SPECTOR’S NOTE: Recent conjecture suggests the two sides could agree to a five-year contract worth around $9 million per season. Yes, that annual average value is high for a player with just one NHL season under his belt, but he won the Calder Memorial Trophy during that campaign, becoming the first Wild player to receive that honor.

Kaprizov’s also the most exciting offensive player the Wild have had since Marian Gaborik’s heyday from 2000 to 2008. They hope to build around this kid for at least the next five years. That’s why it could cost $9 million per season.

Ottawa Senators GM Pierre Dorion described contract discussions with winger Brady Tkachuk’s representatives as positive and productive. The two sides are trying to work out a long-term deal. Tkachuk reportedly won’t travel to Ottawa for training camp until the paperwork is sorted out.

SPECTOR’S NOTE: Tkachuk’s contract talks have garnered increased attention over the last couple of weeks. There have also been conflicting stories with Dorion saying things are going smoothly while other reports claim Tkachuk is growing frustrated it’s taking so long to get a deal done.

The Buffalo Sabres and defenseman Rasmus Dahlin began contract talks on July 21. A three-year bridge deal is possible but Fox wonders if they’ll work toward a long-term agreement.

SPECTOR’S NOTE: The Jack Eichel saga continues to overshadow Dahlin’s contract situation. There’s been no drama thus far but interest in his negotiations could increase as training camp approaches.

Fox also believes Nolan Patrick could get a bridge deal with the Vegas Golden Knights following his unhappy tenure with the Philadelphia Flyers. He was traded to the Golden Knights from the Nashville Predators as part of a three-way deal. Meanwhile, the Edmonton Oilers and representatives for winger Kailer Yamamoto are said to be grinding away toward a bridge deal.

St. Louis Blues forward Robert Thomas seeks more than the $2.8 million AAV signed by teammate Jordan Kyrou. He could miss the start of training camp if he’s not offered a suitable deal. The Blues have limited cap space and haven’t been able to unload Vladimir Tarasenko’s $7.5 million annual cap hit.

SPECTOR’S NOTE: NBC Sports’ Adam Gretz recently suggested Yamamoto as an offer sheet possibility. He considers the 22-year-old winger a good young forward on a team whose cap situation would make it difficult to match a modest $4.1 million offer sheet. Thomas could also be another target, though his struggles last season hurt his chances of getting one.

NHL.COM: Alex Ovechkin and Nicklas Backstrom each had a goal and an assist to lead the Washington Capitals to a 5-3 win over the Philadelphia Flyers. Capitals goalie Braden Holtby collected his 250th career victory while Brian Elliott was chased from the Flyers net after giving up four goals on 19 shots. The Capitals (85 points) hold a two-point lead over the New York Islanders for first place in the Metropolitan Division. The Vancouver Canucks overcame a 2-0 deficit to upset the Toronto Maple Leafs 3-2 on an overtime goal by Alexander Edler. Loui Eriksson and former Leaf Josh Leivo scored in the third period to set the stage for Edler’s winner. The Leafs (87 points) remain two points behind the Boston Bruins for second place in the Atlantic Division while the Canucks (65 points) remain seven out of a wild-card spot in the Western Conference.

Speaking of the Leafs, general manager Kyle Dubas got a chuckle out of Boston Bruins winger Brad Marchand’s subtle trolling by suggesting Mitch Marner is worth $12 million per season. Meanwhile, the club re-signed defenseman Andreas Borgman to a one-year, two-way extension.

Former Canucks forward Jonathan Dahlen has quit social media after receiving hateful messages from Canucks fans upset over his supposed trade request. Canucks GM Jim Benning said Dahlen asked to be traded but the winger said he never made such a request. He was shipped to the San Jose Sharks last week.

SPECTOR’S NOTE: There’s no such thing as “social media”. It’s very anti-social, especially if you’re someone with even a modicum of fame. Dahlen will probably find life less stressful now that he’s off the social media grid.

Third-period goals by Robert Thomas and Alex Pietrangelo lifted the St. Louis Blues to a 5-4 win over the Anaheim Ducks. The Blues had squandered a 3-1 lead before their late third-period rally. Thomas had two goals on the night as the Blues (76 points) remain in third place in the Central Division.

The Vegas Golden Knights picked up their fifth straight victory by edging the Calgary Flames 2-1. Deryk Engelland scored the game-winner in the third period, handing the Flames their third consecutive defeat. Golden Knights netminder Marc-Andre Fleury finally gave up a goal after sporting back-to-back shutouts. The Flames (89 points) remain atop the Western Conference while the Golden Knights (79 points) sit third in the Pacific Division.

BOSTON HERALD: Bruins winger Marcus Johansson suffered a lung contusion following a big hit from Carolina’s Micheal Ferland on Tuesday. He will be re-evaluated in one week.

TSN: NHL commissioner Gary Bettman dismissed speculation of the Ottawa Senators moving given their struggles on the ice and in constructing a new arena in downtown Ottawa. Bettman said he hasn’t been asked to step in and will always help when asked. He also expressed support for Senators owner Eugene Melnyk.

SPECTOR’S NOTE: Senators fans anxious about their team relocating should remember that it takes league approval for that to happen. The time to worry is when Bettman starts dropping hints about relocation unless they start getting more support or a new arena.

Mark Stone contract is not signed yet but it should be done in the next few days. @GoldenKnights GM George McPhee was out of town for family reasons and didn’t met Stone yet. He will soon and he wanted to make sure to be there for the contract signature.

SPECTOR’S NOTE:  Senators general manager Pierre Dorion made no secret of his search for depth at forward. In Burrows, he gets a veteran agitator with plenty of playoff experience who can skate on either wing and plays a decent defensive game.

The 35-year-old used to be a reliable scorer for the Canucks but age has diminished his offensive abilities. It’s unlikely he’ll regain that touch with the Sens, but should provide invaluable defensive grit to their forward lines.

Canucks GM Jim Benning gets a promising return in Dahlen. Though on the small side (5’11”, 176 pounds), the 19-year-old son of former NHLer Ulf Dahlen has good offensive skills and can play at center or on the wing. He could become a key part of the rebuilding Canucks’ future plans.