​Recaps of Friday’s action, a growing concern as COVID-19 spreads through the Canucks roster, the Blackhawks and Panthers make a trade, plus updates on Tuukka Rask, Eric Staal and more in today’s NHL morning coffee headlines.

NHL.COM: Nathan MacKinnon scored two goals to lead the Colorado Avalanche over the St. Louis Blues by a score of 3-2. Avs goaltender Jonas Johansson made 25 saves for his first win of the season. David Perron had a goal and an assist for the Blues. The Avalanche moved into sole possession of first place in the Honda West Division with 52 points, holding a two-point lead over the Vegas Golden Knights. The Blues, meanwhile, dropped to fifth place in the division with 38 points. 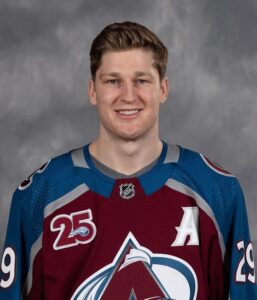 SPECTOR’S NOTE: The Avalanche are red hot of late, riding a 13-game points streak. As for the Blues, they continue to sputter offensively and are in real danger of tumbling out of the playoff race altogether.

The Arizona Coyotes (39 points) moved one point ahead of the Blues into fourth in the West with a 4-2 victory over the Anaheim Ducks. Phil Kessel scored the winning goal and also picked up an assist as the Coyotes have won four of their last five contests.

SPECTOR’S NOTE: Kessel also leads the Coyotes with 15 goals and 28 points in 37 games. Their recent rise into playoff contention could take them out of the sellers’ category with the NHL’s April 12 trade deadline just over a week away.

A shootout goal by Jason Spezza gave the Toronto Maple Leafs a 2-1 win over the Winnipeg Jets. Jack Campbell made 31 saves for the win as the Leafs sit atop the Scotia North Division with 51 points, four ahead of the Edmonton Oilers and the Jets.

Connor McDavid snapped a 2-2 tie in the third period as the Oilers edged the Calgary Flames 3-2, moving ahead of the Jets into second place in the North with 23 wins on the season. Leon Draisaitl collected two assists for the Oilers.

SPECTOR’S NOTE: The Flames (35 points) have lost seven of their last nine games and sit sixth in the North, six points behind the fourth-place Montreal Canadiens who have five games in hand. The Flames are toast unless they stage a remarkable turnaround over the next six weeks and the Canadiens collapse down the stretch.

An overtime goal by Dmitry Orlov lifted the Washington Capitals over the New Jersey Devils 2-1. Devils goaltender Mackenzie Blackwood made 38 saves to keep his club in this one. With 52 points, the Capitals opened a two-point lead over the New York Islanders for first place in the MassMutual East Division.

The San Jose Sharks kept their playoff hopes alive in the West Division by blanking the Los Angeles Kings 3-0. Martin Jones had a 30-save shutout, Brent Burns collected his 500th NHL assist and Rudolfs Balcers had a goal and two assists. With 36 points, the Sharks moved two points ahead of the Kings into sixth place in the division, two points behind the fifth-place Blues and three back of the fourth-place Coyotes.

SPECTOR’S NOTE: The Sharks were given up for dead a month ago but five wins in their last seven contests have moved them into contention for the fourth and final playoff spot in the West.

THE PROVINCE: Seven Vancouver Canucks players and one coach are now on the NHL’s COVID-19 protocol list, with several of the cases involving the highly contagious Brazilian P.1 variant that has resulted in a surge of COVID cases in British Columbia. It’s expected more Canucks players could test positive when the league updates its protocol list later today.

SPORTSNET: NHL deputy commissioner Bill Daly said there has been no consideration given to reducing the number of games the Canucks will play once they emerge from their current shutdown. The club is currently not expected to play again until next Thursday but that date could change as more players get added to the protocol list.

SPECTOR’S NOTE: Quinn Hughes, Alex Edler, Braden Holtby, Antoine Roussel and Zack MacEwen joined Adam Gaudette and Travis Hamonic on the list yesterday. If the league doesn’t intend to reduce the Canucks games that could mean extending the end of the regular season to accommodate those postponed games.

CHICAGO SUN-TIMES: The Blackhawks yesterday acquired forward Vinnie Hinostroza from the Florida Panthers in exchange for minor-league Brad Morrison. Hinostroza began his NHL career with the Blackhawks in 2015-16 and was traded in 2018 to the Arizona Coyotes. He played nine games this season with the Panthers and is due to become an unrestricted free agent this summer.

SPECTOR’S NOTE: The Blackhawks add a depth player they’re familiar with as they jockey for a playoff spot in the Discover Central Division. Hinostroza carries a $1 million cap hit. This move is considered a salary dump by the Panthers, shedding Hinostroza’s $1 million cap hit to perhaps free up space to add a defenseman after Aaron Ekblad recently fractured his leg.

BOSTON GLOBE: Bruins starting goaltender Tuukka Rask’s status remains unclear as he continues to receive treatment for an upper-body injury that’s sidelined him for the past four games.

SPECTOR’S NOTE: That’s not good news for a Bruins club clinging to the final playoff spot in the MassMutual East Division. Third-stringer Dan Vladar could be sticking around a little longer.

SPORTSNET: Eric Staal will be making his debut with the Montreal Canadiens on April 5 against the Edmonton Oilers. The Canadiens acquired Staal last Friday in a trade with the Buffalo Sabres.

NHL.COM: The Ottawa Senators-Winnipeg Jets game scheduled for May 7 has been moved up to April 5.

Alexis Lafreniere tops the first-round selections in the 2020 Draft, the NHL and NHLPA target Jan. 1 as the start date for the 2020-21 season, the Capitals re-sign Brenden Dillon, the latest contract buyouts and more in today’s morning coffee headlines. 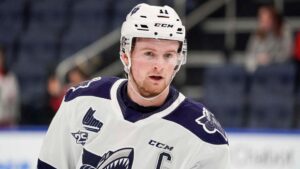 Alexis Lafreniere was selected first overall by the New York Rangers in the 2020 NHL Draft (NHL.com).

NHL.COM: The New York Rangers selected Alexis Lafreniere with the first-overall pick in the first round of the 2020 NHL Draft last night. The Los Angeles Kings selected Quinton Byfield with the second-overall pick while the Ottawa Senators selected Tim Stuetzle with the third-overall selection. Rounds two through seven will be held today starting at 11:30 am ET. (Stick tap to NBC Sports for the list below):

SPECTOR’S NOTE: It’ll be great if the league and PA can safely start next season on New Year’s Day. Whether they can is another matter. COVID-19 will ultimately decide if that start date can be met. The priority is the safety of everyone involved in the games.

NBC SPORTS WASHINGTON: The Capitals re-signed defenseman Brenden Dillon to a four-year contract worth an annual average value of $3.9 million.

SPECTOR’S NOTE: A good, affordable signing by the Capitals. They acquired Dillon before the trade deadline and he quickly fit in well on their blueline.

THE SCORE: Speaking of the Capitals, defenseman Michal Kempny will be sidelined six-to-eight months following surgery to repair an Achilles tendon.

SPECTOR’S NOTE: Kempny will likely go on long-term injury reserve for 2020-21. It would give the Capitals $2.5 million in wiggle room if necessary to make other moves.

MONTREAL GAZETTE: The Canadiens placed defenseman Karl Alzner on unconditional waivers yesterday for the purpose of buying out the remaining two years of his contract. It will count as $3.9 million for 2020-21 against their cap hit, dropping to $1.9 million in 2021-22, and $833K per season for the final two years of the buyout

SPECTOR’S NOTE: The Habs could’ve waited another year to buy out Alzner when it wouldn’t have counted as long against their cap. It’s believed they did this to allow the veteran blueliner an opportunity to try and sign with another NHL club.

SPECTOR’S NOTE: Holland is catching flak from Oilers supporters because he gave up two second-round picks as part of the return to the Detroit Red Wings last February for Athanasiou. The Oilers GM was hoping the speedy winger could regain his 30-goal form but he managed just two points in 13 games in Edmonton. The cost of qualifying his rights was $3 million, which would’ve been too expensive for the cap-strapped Oilers.

SPORTSNET: The Vancouver Canucks re-signed winger Zack MacEwen to a two-year contract worth $825K per season.

Per source, the Coyotes will not tender a qualifying offer to RFA forward Vinnie Hinostroza. He will become a UFA.

← Canadiens Trade Domi to Blue Jackets for Anderson NHL Rumor Mill - October 7, 2020 →
We use cookies on our website to give you the most relevant experience by remembering your preferences and repeat visits. By clicking “Accept”, you consent to the use of ALL the cookies.
Do not sell my personal information.
Cookie SettingsAccept
Manage consent