SPECTOR’S NOTE: Forsberg now has 10 goals and 15 points in just 13 games. Granlund, meanwhile, has 25 points in just 22 games. He had a combined 57 points over the last two seasons but should exceed that total this season at his current rate of production.

Four unanswered third-period goals lifted the Florida Panthers to a 5-4 victory over the Washington Capitals. Sam Reinhart buried the winner with just 15 seconds remaining in regulation. Jonathan Huberdeau and Aaron Ekblad each collected three assists for the Panthers.

Ryan O’Reilly scored the only goal in a shootout as the St. Louis Blues overcame a 3-0 deficit to drop the Tampa Bay Lightning 4-3. O’Reilly also scored in regulation while Jordan Binnington settled down from a shaky first period to make 30 saves for the win. Lightning captain Steven Stamkos missed the game to attend the birth of his second child while Erik Cernak returned to the Bolts lineup after missing eight games with an upper-body injury.

Dallas Stars forward Roope Hintz tallied a hat trick as his club downed the Carolina Hurricanes 4-1. Joe Pavelski also scored for the Stars and collected two assists while Braden Holtby picked up the win with a 39-save performance. Earlier in the day, the NHL fined Hurricanes head coach Rod Brind’Amour $25,000.00 for inappropriate conduct during Sunday’s game against the Capitals. Brind’Amour yelled at the referees late in the game over a slashing call against Sebastian Aho that gave the Capitals a 5-on-3 power play.

Shootout goals by Trevor Zegras and Kevin Shattenkirk lifted the Anaheim Ducks over the Los Angeles Kings 5-4. The Kings rallied back from a 4-1 deficit in the third to tie the game. Kings defenseman Drew Doughty returned to the lineup for the first time since suffering a knee injury on Oct. 22. The Kings also played without winger Brendan Lemieux, who was suspended five games for biting Ottawa Senators captain Brady Tkachuk on Saturday.

SPECTOR’S NOTE: In the “Apple Doesn’t Fall Far From The Tree Department”, Brendan and his father Claude Lemieux hold the dubious honor of being the first father/son duo in NHL history to be suspended for biting opponents during their respective careers.

The Detroit Red Wings got a 41-save performance from Alex Nedeljkovic as they nipped the Boston Bruins 2-1. Marc Staal broke a 1-1 tie in the third period. The Bruins were playing without Brad Marchand (three-game suspension) and head coach Bruce Cassidy after he was placed in COVID protocol yesterday.

SPECTOR’S NOTE: Speaking of COVID protocols, the NHL sent a memo to its 32 teams yesterday outlining a series of new measures designed to curb the spread of the coronavirus. Those steps include canceling team Christmas parties, charity events and autograph sessions.

A 5-2 win over the Arizona Coyotes moved the Minnesota Wild into a tie with the Calgary Flames for first place in the Western Conference standings. Jordan Greenway had a goal and two assists while Kirill Kaprizov had a goal and an assist. Clayton Keller scored and set up another for the Coyotes.

SPECTOR’S NOTE: The Devils are making a major investment in the 20-year-old Hughes after just 120 games and 55 points since 2019-20. He’s shown considerable potential since last season but will face a lot of pressure to meet the expectations that come with this contract. If he does, this could turn into a worthwhile deal for one of their core players.

THE SCORE: Evander Kane downplayed reports from earlier this summer claiming his San Jose Sharks teammates were frustrated by his behavior and didn’t want him back on the team this season. He said his end-of-season interview with management was positive, singling out how well he worked with the younger players and praising his performance. Kane cleared waivers Monday and reported to the AHL’s San Jose Barracudas, where he took part in his first practice with the team on Tuesday.

SPECTOR’S NOTE: Meanwhile, there were reports during the offseason claiming the Sharks attempted to trade Kane earlier in the summer. They’re reportedly trying to do so again. Draw your own conclusions, folks.

CBC SPORTS: Quebec Remparts general manager and coach Patrick Roy has expressed interest in the Montreal Canadiens’ vacant general manager position. “Since 1993, this club has been running in circles,” said the Canadiens Hall-of-Famer. “What do they have to lose by giving me a chance, and seeing what I can do with this club?”

SPECTOR’S NOTE: The issue would be whether the temperamental Roy could work well with Jeff Gorton, the Canadiens’ new executive VP of hockey operations. That might not be possible given his departure from the Colorado Avalanche in 2016 over a disagreement regarding the direction of that club. The last thing the Habs will want is their next GM butting heads with Gorton and turning their disagreements into a media circus.

​The Capitals take over the top spot in the overall standings, the Leafs tie their franchise record for consecutive road wins, speculation over the next Canadiens’ general manager, Matt Murray demoted, Evander Kane on waivers, and more in today’s NHL morning coffee headlines.

NHL.COM: John Carlson scored and set up two others as the Washington Capitals doubled up the Carolina Hurricanes 4-2, vaulting over the Hurricanes into first place in the overall standings. The Hurricanes overcame a 2-0 deficit to tie the game but Washington defenseman Dmitry Orlov potted the game-winner with a power-play goal late in the third period. Capitals captain Alex Ovechkin tallied his 19th goal of the season. Lars Eller returned to Washington’s lineup after missing six games due to COVID-19. 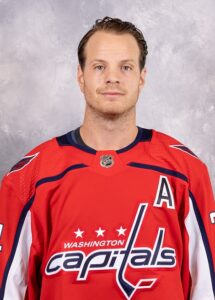 The Toronto Maple Leafs tied a franchise record with their seventh straight road victory by downing the Anaheim Ducks 5-1. Jack Campbell made 39 saves, Auston Matthews tallied his 10th goal of the season and John Tavares (22 points) maintained his place as the Leafs’ leading scorer with two assists. Leafs forward Ondrej Kase missed the game with an upper-body injury. Toronto (16-6-1) has won nine of their last 10 games. They’re tied in points with Washington (33) but the latter holds first overall by having a game in hand.

New Jersey Devils forward Andreas Johnson enjoyed a four-point performance (two goals, two assists) in a 5-2 victory over the Philadelphia Flyers, who’ve dropped six straight games. Devils defenseman Dougie Hamilton also scored using a custom stick in honor of Thea, a young girl Hamilton grew close with in Calgary who passed away from cancer. He put her name on his stick as part of the NHL’s Hockey Fights Cancer Night. “It’s great to score for her and her family,” said Hamilton. The Flyers, meanwhile, have lost six straight games.

Brad Marchand and David Pastrnak scored in the third period as the Boston Bruins nipped the Vancouver Canucks 3-2, handing the latter their ninth loss in the last 10 games. Linus Ullmark got the win with 36 saves.

San Jose Sharks goaltender James Reimer made 29 saves for his first shutout of the season by blanking the Chicago Blackhawks 2-0. Timo Meier scored both goals for the Sharks.

SPECTOR’S NOTE: Briere indicated he’d listen carefully to a proposal from the Canadiens but he hasn’t been contacted yet. Neither has Roy, whose name inevitably pops up whenever there’s talk of the Canadiens getting a new GM.

The reason why none of them have been called thus far is that Gorton will be the one who’ll do the hiring. Some pundits believe he will be running the show regardless of who becomes the next general manager.

That doesn’t mean the next GM will be a figurehead or puppet for Gorton. Whoever gets the job will work closely with the new hockey ops VP. However, Gorton will likely have the final say on all significant management decisions while Molson takes a step back from the day-to-day operations.

The next Canadiens general manager must be bilingual, a policy that for years limited the depth of talent the club could draw upon for available experienced management. The current list of available candidates with NHL management experience is rather thin. Having the unilingual Gorton in charge of overall hockey operations is a clever workaround, enabling the Habs to bring in a respected, well-seasoned NHL executive.

NBC SPORTS BAY AREA: The San Jose Sharks yesterday placed winger Evander Kane on waivers in anticipation of the completion of his 21-games suspension on Nov. 30. If he clears waivers later today, he’s expected to report to their AHL.

SPECTOR’S NOTE: If Kane doesn’t report he will be suspended without pay. Sharks assistant GM Joe Will didn’t dismiss the possibility of the troubled winger getting traded. I’ll have more on that in today’s rumor mill.

OTTAWA SUN: Senators goaltender Matt Murray cleared waivers yesterday and has been assigned to their AHL affiliate in Belleville.

SPECTOR’S NOTE: Lemieux could face a suspension of over five games, which would take a bite out of his salary. Sorry, couldn’t resist the pun.

TRIBLIVE.COM: Fenway Sports Group has signed a purchase agreement to assume a controlling stake in the Pittsburgh Penguins. Senior management is expected to remain in place following the sale of the club. Current co-owner Mario Lemieux is also supposed to stay with the club in some capacity.

← Canadiens Fire Bergevin, Timmins NHL Rumor Mill - November 29, 2021 →
We use cookies on our website to give you the most relevant experience by remembering your preferences and repeat visits. By clicking “Accept”, you consent to the use of ALL the cookies.
Do not sell my personal information.
Cookie SettingsAccept
Manage consent