In other contract news, the Ottawa Senators sign Matt Murray to a four-year contract with an annual average value of $6.25 million. The Senators acquired Murray, a restricted free agent, on Wednesday from the Pittsburgh Penguins.

In other news, the Tampa Bay Lightning placed winger Tyler Johnson on waivers. He has four years remaining on his contract with a $5 million annual cap hit and a full no-trade clause.

Oliver Ekman-Larsson will remain with the Arizona Coyotes. His deadline to be traded to either Boston or Vancouver came and went without a deal.

​Some suggested free-agent targets for the Sharks plus a rumor linking Peter Chiarelli to the Coyotes in today’s NHL rumor mill.

Goaltending targets could include the New York Islanders Thomas Greiss, the Dallas Stars’ Anton Khudobin, or the Calgary Flames’ Cam Talbot. Of the three, Talbot could be more affordable. 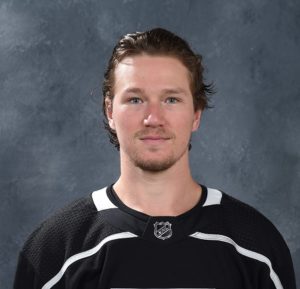 Finding the right fit won’t be easy. With the salary cap remaining at $81.5 million, the Sharks have over $66 million invested in their payroll for 2020-21. Nevertheless, Kurz doesn’t expect them to sit idly by in the off-season.

SPECTOR’S NOTE: Goaltending depth could be the priority given starter Martin Jones’ struggles and backup Aaron Dell’s expected departure via free agency. Talbot might be the cheapest option on Kurz’s list but he could also be looking for a starter’s job. If he can’t find that role, he could be amenable to another short-term backup role.

While the changing economic landscape could affect this year’s free-agent market, I doubt the Sharks could afford Toffoli or Dadonov. Granlund is a possibility as his stock declined following his trade to the Predators last year, though his play improved when John Hynes took over as head coach in January. Gudas or DeMelo could be more affordable options to shore up the blueline depth.

Sharks general manager Doug Wilson has a well-earned reputation for making bold moves. He could surprise us this summer, though it’ll mean shedding some salary if he intends to make a splash in the UFA market.

CHIARELLI TO THE COYOTES?

Staples points out such a move would reunite Chiarelli with winger Taylor Hall, who was traded by Chiarelli to the New Jersey Devils in 2016. The only way he sees the Coyotes bringing in Chiarelli is if they have no chance of keeping Hall off the free-agent market in the off-season.

SPECTOR’S NOTE: On the one hand, Chiarelli won a Stanley Cup in 2011 as GM of the Bruins. On the other hand, his tenure with the Oilers was considered disastrous.

The Coyotes must choose Chayka’s replacement very carefully. This is a team dogged for years by ownership instability and mismanagement. They’ve been building in recent years toward playoff contention with promising young talent. Putting the wrong person in the GM’s chair could send them spiraling again, raising questions about their long-term future in Arizona at risk.

Potential progress being made toward a 24-team playoff format, Eugene Melnyk hopes the 2020 draft will be held in June and the latest on Ryan Miller in today’s NHL morning coffee headlines.

TSN: Pierre LeBrun reports sources claimed the NHL-NHLPA Return to Play committee made progress over the weekend toward a 24-team playoff format if the league resumes action this summer. He cautions more work needs to be done and it’s difficult to determine if a decision will be reached this week. Discussions are expected to continue in the coming days. LeBrun also reports the NHL Board of Governors will have a conference call slated for 3 pm ET today.

LeBrun indicated the potential format wouldn’t jump straight into playoff action, but would instead see some games leading up to the postseason. Several NHL players aren’t on board with this concept but it appears more of them would support that format. The committee also has to determine the timeline for when the self-isolation period is lifted to enable players to return to NHL facilities for small group workouts.

SPECTOR’S NOTE: Washington Capitals defenseman Radko Gudas could be among the players against this idea. He reportedly believes the NHL should simply cancel the season. Gudas isn’t on the Return to Play committee, but I daresay his concerns are shared by some of his peers. He’ll get an opportunity to express his views to his NHLPA player rep, who’ll cast a vote on his teammates’ behalf on whether to resume the season.

Capitals owner Ted Leonsis is the latest team owner to state his belief the league will return to action soon. However, this proposed return-to-play plan is drawing criticism from several pundits. The Toronto Star’s Damien Cox dismisses the notion of summertime hockey, suggesting the league is running out of time to reach a decision. The Edmonton Journal’s Jim Matheson doesn’t see the sense of a 24-team playoff, though The Hockey New’s Ken Campbell points out the league can recoup more of its lost revenue with that format. Addressing the logistics of a 24-team format in four hub cities with many players cut off from their families while undergoing regular COVID-19 testing will be challenging. Gudas, Cox, and Matheson raise valid points that are likely shared by many hockey fans.

The NHL might not be able to pull this off. Nevertheless, they’re going to try. We’ll find out soon enough if they can do it.

LeBrun also believes the 2020 NHL Draft will also be a topic of discussion among the Board of Governors today. He feels there’s been too much opposition to staging the draft before resuming the season. However, it doesn’t require official approval from the governors. The final decision rests with Commissioner Gary Bettman.

SPORTSNET: Ottawa Senators owner Eugene Melnyk hopes the league stages the draft lottery and the draft next month. “I just hope that we can have some events happen in June to keep people interested. And if that’s just a draft lottery, that would be great. If it’s a draft as a draft lottery that’s even better,” Melnyk said.

SPECTOR’S NOTE: Melnyk has good reason for wanting the lottery and the draft to be held next month. The Senators have three picks in the first round of this year’s draft, including two that would be second and third overall based on the current standings. That third-overall pick belonged to the San Jose Sharks.

Under the league’s proposed one-time change to this year’s draft lottery, the Senators would drop no lower than one place if a low-seeded club other than themselves or the Detroit Red Wings win the lottery. If they or the Sharks win, they’ll have the first and third overall selections.

The Senators wouldn’t be part of the proposed 24-team playoff format. Holding the lottery and the draft next month would give their fans something to get excited about for this summer and looking ahead to next season.

THE SCORE: Anaheim Ducks goaltender Ryan Miller hopes to keep playing hockey next season, but acknowledged this pandemic could also force his retirement. “I mean the desire is there, but there’s going to be a lot of factors. First of all, we’re all going to have to address this new normal. What that means for sports and life – and wrapped up in that is family and how family is going to need to be taken care of during this time,” Miller said.

SPECTOR’S NOTE: Where Miller is at this stage in his NHL career will also be a determining factor. The 39-year-old goalie is already in the twilight of his career. He’s an unrestricted free agent this summer. If he can’t sign with a California-based club, he could be forced to hang up his pads.

Check out the latest Flames and Capitals speculation in today’s NHL rumor mill. Could Johnny Gaudreau face an uncertain future with the Calgary Flames? (Photo via NHL Images)

Francis believes it may have been clear to management to consider trading Johnny Gaudreau and/or Sean Monahan had they failed to get the Flames into the playoffs this season or beyond the opening round. Assuming the schedule doesn’t resume, Gaudreau and Monahan will get another shot at it next year.

SPECTOR’S NOTE: I don’t think the Flames will move Gaudreau and/or Monahan following this season. If the schedule resumes this summer and the Flames struggle again, it will be a justifiable reason not to peddle one or both of their young stars. Nevertheless, those two will feel the pressure to step it up next season. Another disappointing finish in 2020-21 will raise questions over their respective futures in Calgary.

Five of their nine defensemen – Travis Hamonic, TJ Brodie, Michael Stone, Erik Gustafsson, and Derek Forbort – are unrestricted free agents. Keeping Hamonic or Brodie could be the priority, while Calgary-resident Stone could be re-signed at the league minimum as a short-term insurance policy.

SPECTOR’S NOTE: The Flames are fortunate to have some promising youngsters that can replace those UFA blueliners they don’t re-sign. I can see them keeping Hamonic or Brodie to maintain some experienced stability on the right side of their blueline. I agree with Francis’ take on Stone. Gustafsson and Forbort, meanwhile, were short-term pickups to buoy the Flames’ defense down the stretch and into this postseason

Re-signing Cam Talbot and what form of compensation they’ll get from last summer’s James Neal-for-Milan Lucic are other questions facing the Flames. Talbot resurrected his career in Calgary, but Francis wondered if he might prefer playing where he can get more playing time.

The Flames were supposed to receive a third-round pick in 2020 if Neal scored 21 goals and Lucic ten fewer than Neal. Neal has 19 goals and Lucic eight. If the season isn’t resumed, the Flames could appeal for a ruling from the league.

SPECTOR’S NOTE: If the Flames are comfortable with David Rittich was their starter, they can afford to part ways with Talbot unless he’s willing to accept the backup role. They can find some suitable replacements for him via the UFA market.

Despite the second-half improvement in goaltender Braden Holtby‘s performance, his days are likely numbered in Washington. The Caps’ limited cap room makes him too expensive to re-sign. Meanwhile, recently-acquired winger Ilya Kovalchuk‘s performance over the rest of the schedule and the Capitals cap space will determine whether they can afford him.

A strong finish to the season could earn recently-acquired defenseman Brenden Dillon a contract extension if his asking price is reasonable. Blueliner Radko Gudas appeared the odd-man-out in recent games, which doesn’t bode well for his return.

Despite his struggles, Holtby will seek a raise over his current $6 million AAV. With Ilya Samsonov their future starter, they have little choice but to part ways with Holtby following this season. Kovalchuk, meanwhile, is reportedly all-but-assured of returning to the Montreal Canadiens on a one-year, bonus-laden deal next season.