​The Penguins down the Capitals, the Golden Knights edge the Avalanche, plus the latest injury and COVID protocol list updates in today’s NHL morning coffee headlines.

NHL.COM: Bryan Rust scored two goals and collected an assist as the Pittsburgh Penguins defeated the Washington Capitals 6-3. Jake Guentzel also had a three-point performance (one goal, two assists) while Sidney Crosby had a goal and an assist. 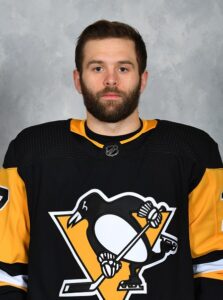 Marc-Andre Fleury turned in a 30-save shutout as the Vegas Golden Knights blanked the Colorado Avalanche 1-0. Max Pacioretty tallied the game’s only goal. It was the Avalanche’s first game since their schedule was postponed on Feb. 4 for COVID-19 protocols.

SPECTOR’S NOTE: Fleury now has 473 career victories, sitting just 11 behind Ed Belfour for fourth on the all-time list. His 63 shutouts place him one back of Henrik Lundqvist for 16th all-time.

TAMPA BAY TIMES: Lightning captain Steven Stamkos came off the NHL’s COVID protocol list yesterday after it was determined his first test was a false positive. He remains sidelined with a lower-body injury.

WGR 550: Buffalo Sabres coach Ralph Krueger and defenseman Rasmus Dahlin came off the protocol list yesterday. Krueger, who tested positive for COVID-19 earlier this month, joined the Sabres on the ice for a few minutes during yesterday’s practice. He isn’t sure if he’ll be behind the bench for their game today against the New York Islanders. The Sabres haven’t played since Jan. 31 due to COVID protocols.

NBC SPORTS PHILADELPHIA: The Flyers still have seven players on the protocol list. Travis Sanheim came off the list yesterday but winger Travis Konecny was added to it. The Flyers’ next scheduled game is Thursday against the New York Rangers, after which they’re slated to fly to Lake Tahoe for an outdoor game against the Boston Bruins on Sunday.

TORONTO STAR: Joe Thornton returns to the Maple Leafs lineup tonight against the Ottawa Senators after missing 10 games with a rib injury.

← NHL Rumor Mill - June 1, 2020 NHL Morning Coffee Headlines - June 2, 2020 →
We use cookies on our website to give you the most relevant experience by remembering your preferences and repeat visits. By clicking “Accept”, you consent to the use of ALL the cookies.
Do not sell my personal information.
Cookie SettingsAccept
Manage consent