​Leon Draisaitl powers the Oilers to a comeback win, the Kings and Ducks extend their winning streaks, the Blue Jackets set to honor Rick Nash and more in today’s NHL morning coffee headlines.

NHL.COM: Leon Draisaitl scored twice in the third period as the Edmonton Oilers overcame a 3-2 deficit to defeat the Boston Bruins 5-3. Draisaitl leads all NHL scorers with 12 goals and also collected an assist. Teammate Connor McDavid collected an assist to extend his points streak to 12 games. David Pastrnak and Patrice Bergeron each had two points for the Bruins.

SPECTOR’S NOTE: With 26 points, Draisaitl sits two points ahead of McDavid atop the NHL scoring race.

A 34-save shutout performance by Jonathan Quick carried the Los Angeles Kings to a 2-0 win over the Ottawa Senators. Anze Kopitar and Andreas Athanasiou were the goal scorers as the Kings (8-5-1) extended their win streak to seven games. The Senators have nine players on the COVID protocol list, including Matt Murray, Alex Formenton and Nikita Zaitsev going on the list yesterday. Sens defenseman Artem Zub left the game with an upper-body injury in the first period.

SPECTOR’S NOTE: That could be the last game the Senators play for a while if more of their players end up on the COVID list over the next couple of days. The league is monitoring their situation closely and could postpone several upcoming games.

Anaheim Ducks winger Troy Terry scored twice and collected an assist to extend his points streak to 13 games in a 7-4 victory over the Seattle Kraken. Ryan Getzlaf collected two assists as the Ducks (8-4-3) have won six in a row. Jared McCann tallied twice for the slumping Kraken (4-9-1), who’ve dropped three straight games.

Mikko Rantanen had a goal and two assists while defensemen Cale Makar, Devon Toews and Samuel Girard each had two points as the Colorado Avalanche thumped the Vancouver Canucks 7-1. The Avs scored three times in the first period and another three in the second to put the game out of reach. Colorado blueliner Bowen Byram left the game in the first period after taking an elbow to the face from Canucks center Bo Horvat. Canucks defenseman Tucker Poolman was ejected in the third period for swinging his stick at the head of Avs forward Kiefer Sherwood.

The New Jersey Devils blanked the New York Islanders 4-0 with goaltender Mackenzie Blackwood kicking out 42 shots for the shutout. Dougie Hamilton led the way with a goal and an assist.

Zach Fucale made 21 saves to become the first goalie in Washington Capitals history to notch a shutout in his first NHL game in a 2-0 win over the Detroit Red Wings. Dmitry Orlov and Lars Eller were the goal scorers. Capitals captain Alex Ovechkin collected an assist but remains tied with Brett Hull for fourth place on the all-time goal-scoring list with 741.

Shootout goals by Bryan Rust and Jeff Carter gave the Pittsburgh Penguins a 3-2 win over the Florida Panthers. Tristan Jarry got the win by stopping 36 shots. Panthers captain Aleksander Barkov scored to extend his points streak to eight games. After getting off to a 10-0-1 start, the Panthers are 0-2-1 in their last three contests.

Matt Duchene tallied two goals, including the game-winner to lead the Nashville Predators over the St. Louis Blues 4-3. Mikhail Granlund collected four assists for the Predators while Jordan Kyrou scored twice for the Blues.

The Winnipeg Jets tallied four straight goals to beat the San Jose Sharks 4-1. Pierre-Luc Dubois had a goal and an assist while Connor Hellebuyck turned aside 26 shots for the win.

Vegas Golden Knights goalie Laurent Brossoit made 24 saves as his club held on for a 3-2 win over the Minnesota Wild, snapping the latter’s four-game win streak. Golden Knights forwards Paul Cotter and Jonas Rondbjerg each scored their first-ever NHL goals.

Nick Suzuki snapped a 2-2 tie in the third period as the Montreal Canadiens doubled up the Calgary Flames 4-2 to end the latter’s five-game road winning streak. Suzuki and Brendan Gallagher each had a goal and an assist.

THE COLUMBUS DISPATCH: Rick Nash will become the first player in Blue Jackets history to have his number retired in an on-ice ceremony before their March 5, 2022 game against the Boston Bruins. The first-overall pick by the Blue Jackets in 2002, Nash is their franchise leader in games played (674), goals (289), assists (258) and points (547).

SPECTOR’S NOTE: Nash deserves that honor. He was a true franchise player but the Jackets management wasted most of his nine-season tenure in Columbus by failing to build a solid supporting cast around him.

SPORTSNET: Lawyers representing the Chicago Blackhawks sent a letter to Kyle Beach’s attorney requesting mediation in their lawsuit settlement negotiations. In the letter, the club’s lawyers called Beach’s initial demand “extraordinary”. Beach’s lawyer replied the Blackhawks did not make a counteroffer. The former player is suing the team over its handling of his allegations of sexual assault against former video coach Bradley Aldrich.

EDMONTON JOURNAL: Oilers goaltender Mike Smith has suffered a setback in his recovery from a lower-body injury suffered 23 days ago. He’s unlikely to rejoin the club for the remainder of their current road trip.

NHL.COM: The department of player safety fined Carolina Hurricanes defenseman Anthony DeAngelo $2,000.00 for diving and embellishment in a recent game against the Florida Panthers.

The Arizona Coyotes announced assistant coach Phil Housley has been placed on the COVID protocol list. 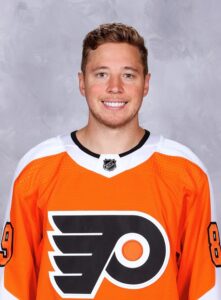